I wanted to create, but it was windy

This is the second embroidery I’ve been working on in a time line; not being linear enough to work on one project at a time I interspersed it with various other works that I’ll talk about later. 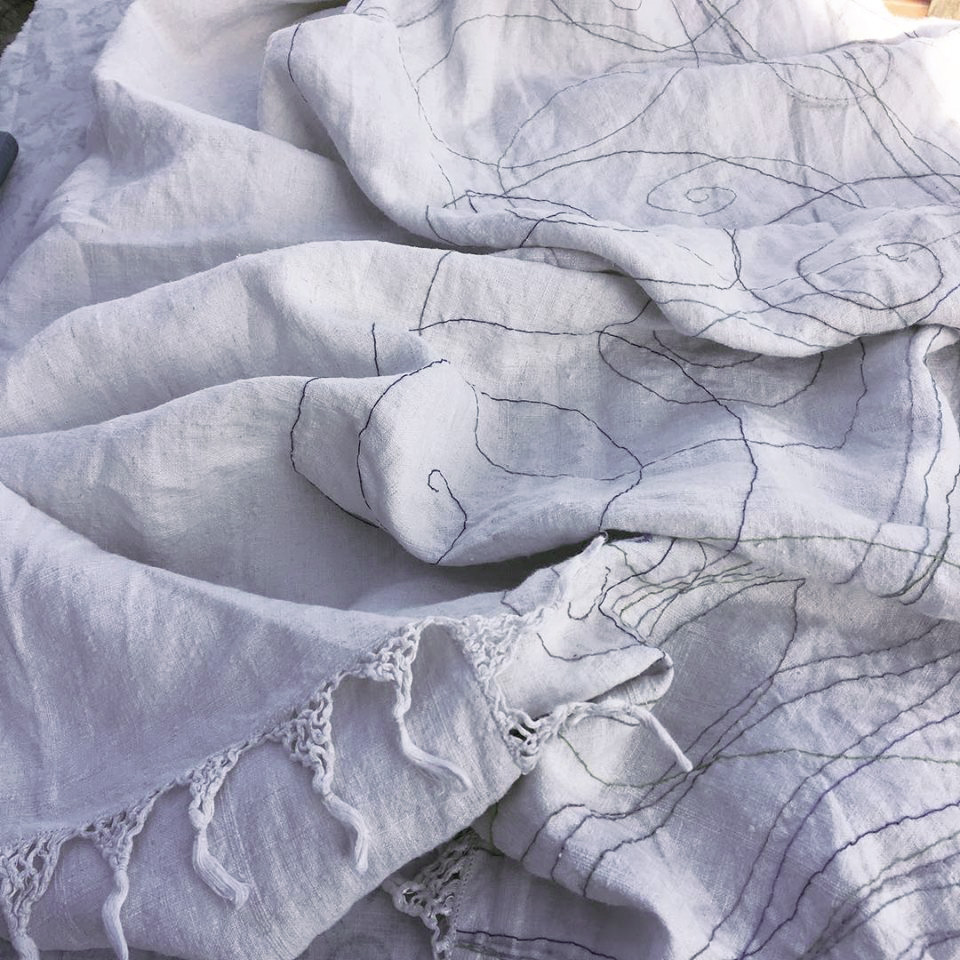 The beginning is tactile/olfactory: I open the drawer of vintage trousseau recovered here and there and choose the fabric that currently attracts me the most. In this case, a towel that measures a bit more than a meter and a half by 70 centimeters; since I haven’t been embroidering long, it would have been wiser to choose a small fabric. It would have been. 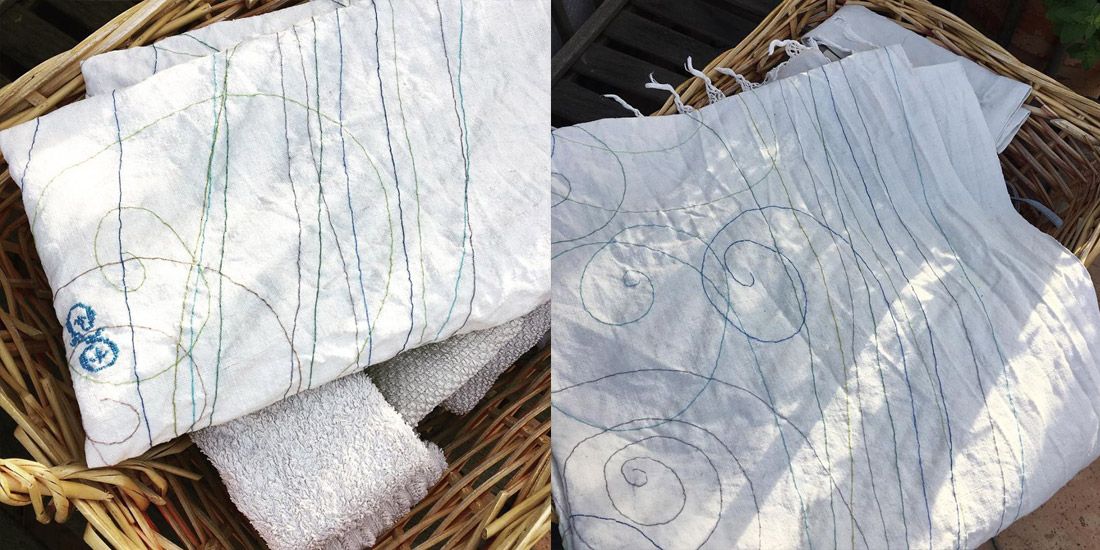 I lay the fabric on a hard surface or on the bed and draw something on it; at the very beginning I used a plastic marker made especially for this kind of work: it leaves a blue/green mark that disappears when the fabric is washed. I replaced it almost immediately with a grease pencil, I couldn’t imagine having to purchase and use such a polluting item. 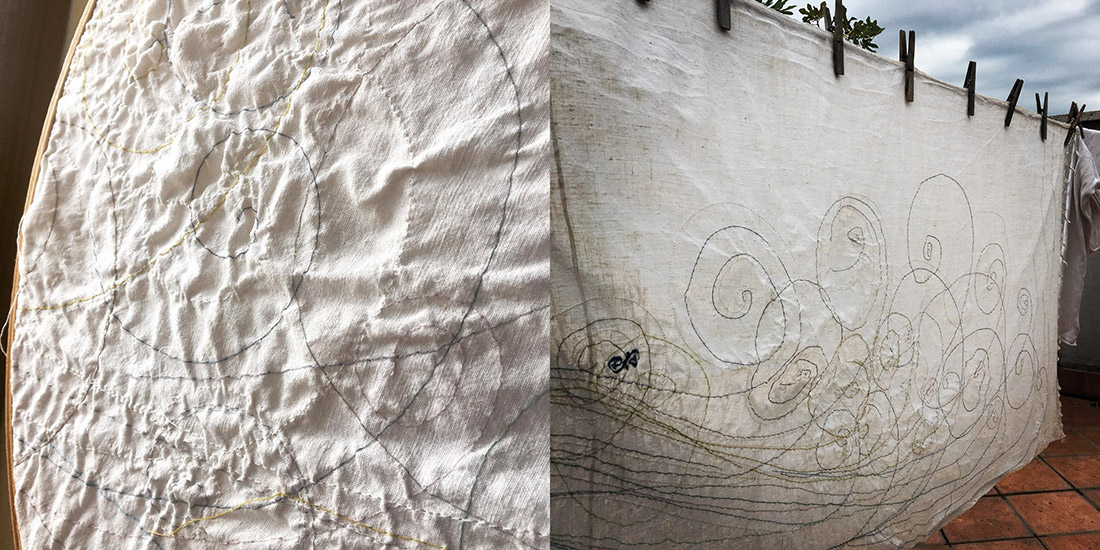 When I am more or less satisfied with the design, I mount the fabric on a large round wooden frame, trying to pull it as little as possible so as not to deform the lines, and with the needle (I always embroider by hand) I slowly trace the figure drawn in pencil. It takes a lot of patience, very long time, and I often find that after an hour of work I unthread everything and start again, because maybe I don’t like the way a curve has come out or some other detail that I think only I can see. 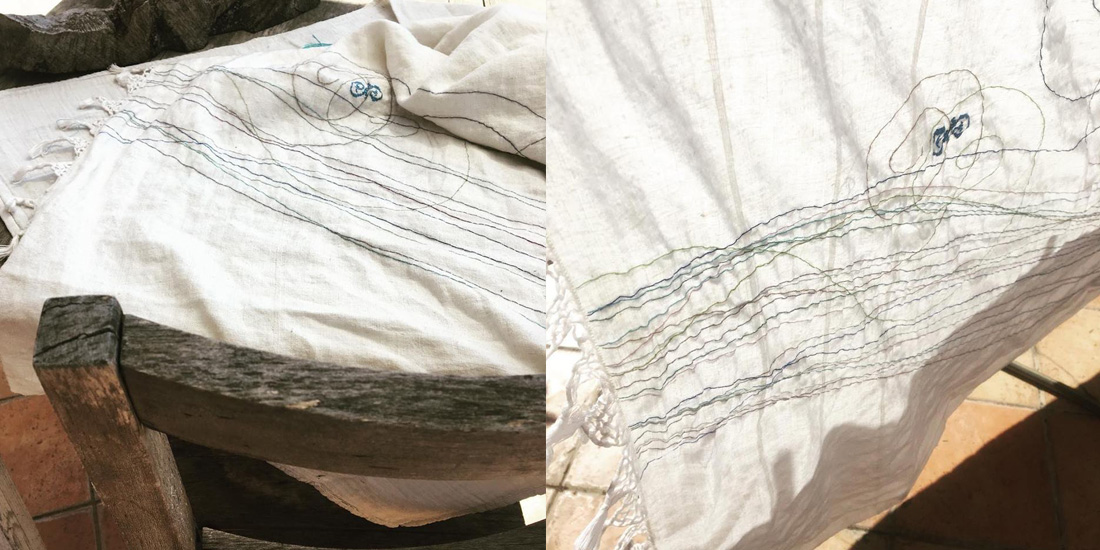 Finishing the work that came before this one, of the same size, took, I think, eight months, partly because I don’t have a lot of experience yet and I’m not super decided on how to proceed. I’m also not sure I won’t go back to it. 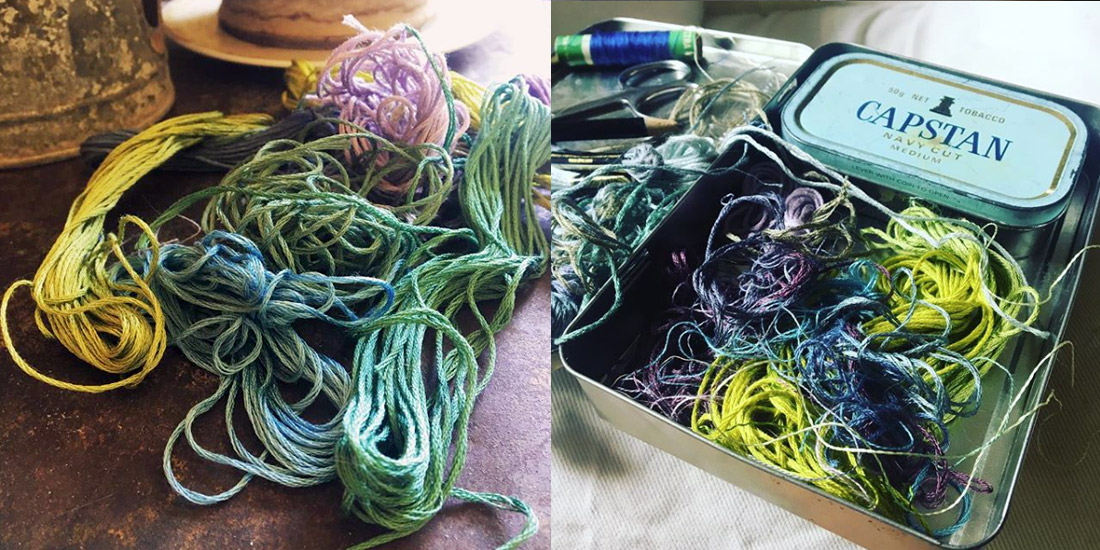 As for materials, initially I used regular cotton skeins that you buy at a haberdashery. Then, after doing some work, I realized that the threads were too hairy and messy, not compact, and I thought of using the normal sewing threads, but in Italy you can only find them mounted on plastic spools; I’m almost sure that the cotton is GMO, and also the colors are certainly not environmentally friendly. By now, for me, after all the awareness I’ve done with the naked meal, these compromises are unfeasible. 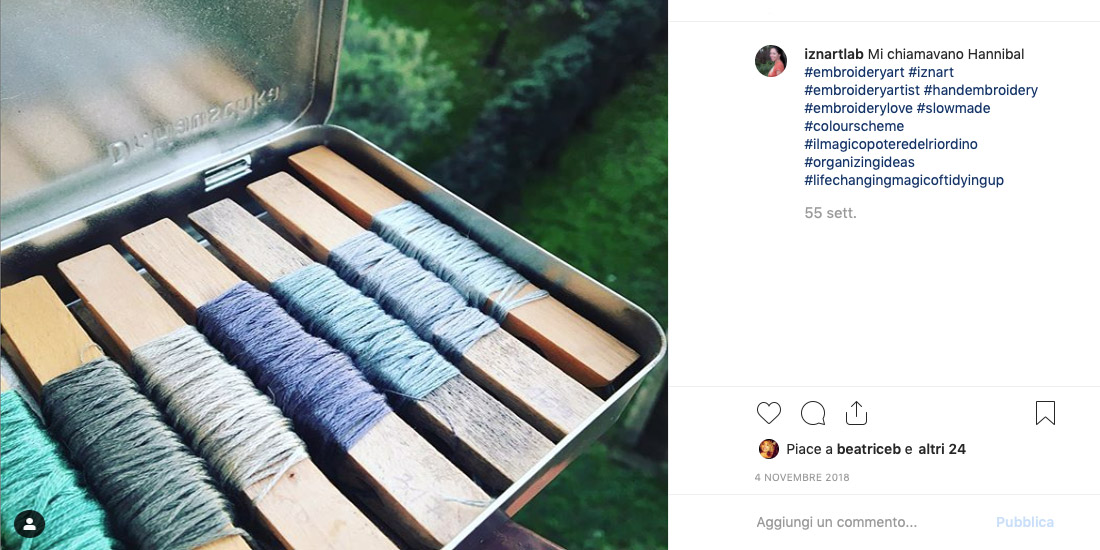 So I found on Etsy this organic cotton thread, dyed with natural colors and mounted on wooden spools, that unfortunately doesn’t exist in Italy (or at least I didn’t find it) and arrives from Germany; and I feel great with it. The threads are compact and smooth, and hold up well to the various machine washes I have to do every so often to wipe excess pencil from the fabric. 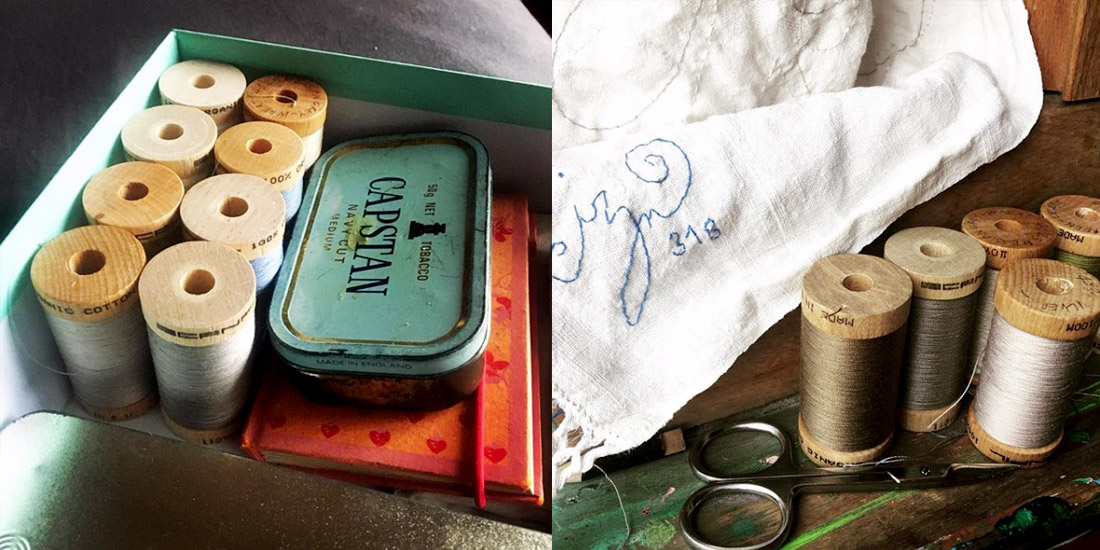 I don’t know how to express the emotion I feel when I find myself in front of the white fabric, so organic (in the Cronenberg sense of the word) and I can pierce it with the needle, changing its aspect and structure, leaving it at the same time intact and free to return exactly to its original shape, like a bloodless and risk-free surgery. The same threads that furrow the fabric are similar to veins that transpire from the skin. 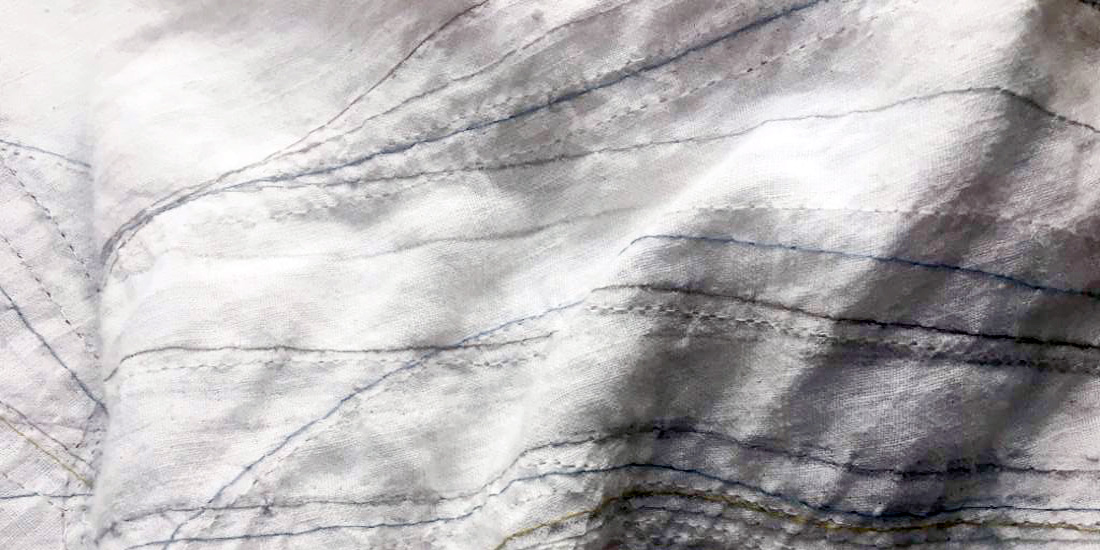 That’s how I’m doing for now; I carve out half an hour to two hours each day to work, almost always fighting with the inner voices that say I’m ridiculous, that embroidery art is insignificant and bland, that it’s a waste of precious time that I should be using to do work that will bring me a secure income, and various other kinds of devaluation that mostly go back to things I’ve heard from people who held me in high esteem when I was too young to have an opinion of my own and defend it. 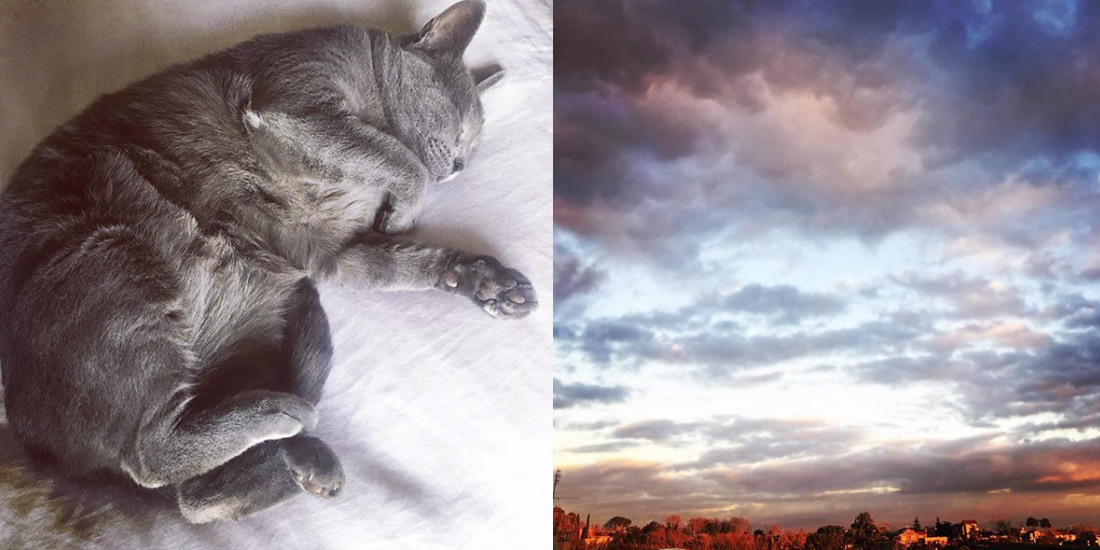 In the end it’s right that everyone faces and fights his own monsters rather than denying their existence and finding them suddenly in front of him as a hungry tyrannosaur. Sooner or later, turning them over in my hands, I’ll find a weak point through which I’ll get better. Then he says art is cathartic 😀